Metaphors play a vital role in how human beings make sense of the world. The ways in which we view and describe both the world around us and abstract thoughts often are inherently metaphorical. When relating to time, for example, we often use spatial metaphors such as “to look forward to”, “time moving forward”, or “to turn back time”.

For some though, relating to time in terms of spatial concepts and relations can take on quite a literal meaning.

I’ve always visualised numbers, sequences of numbers, as well as units of time – and sequences thereof – as spatial representations.

I used to think that most people do this in one way or another because to me it just seems like the obvious, natural of envisioning numbers, timelines, and specific segments on such timelines.

Turns out, most people don’t. It was only fairly recently that during a conversation with friends I was made aware of the fact that to most people numbers and time sequences are abstract rather than visual concepts. In fact, although this is not entirely uncommon, only 1 in 5 people perceive and visualise time in that manner. That phenomenon is a specific type of synaesthesia called time-space synaesthesia.

Seminal author and neurologist Richard Cytowic, who sparked a renewed interest in the subject of synesthesia in the 1980s, provides this example of how a visual representation of numbers can look like to a synaesthete with that type of synaesthesia: 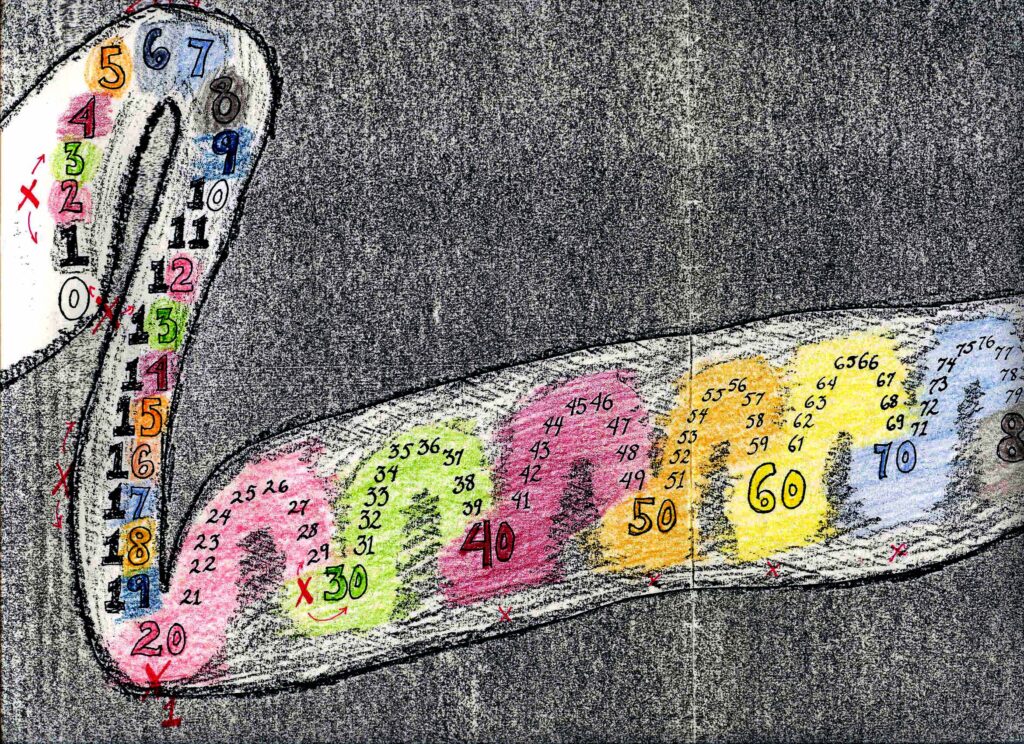 Though in some ways uncannily similar to how I visualise numbers, my own personal representation of integers looks more like this:

This is my mental mapping for months in the year:

There are different structures for days in the week and days in the month, too, although those are more similar to the construct for integers shown above.

Interestingly, visual representations of numeric sequences in space tend to take the shape of logarithmic spirals or self-similar curves, on which different orders of magnitudes occupy roughly the same space. This looks like the brain optimising these representations for user experience by allowing for quick access to more commonly used numbers “at a glance”, while still accounting for the option to drill down, if need be.

One further aspect to note here is that, although that multicoloured ribbon on which integers are located for me starts at zero, in the opposite direction it extends into negative numbers as well.

A common popular understanding of how synaesthesia works is that there’s a definite association between distinct phenomena perceived by different senses, e.g., a particular pitch, say A4 (440 Hz), always being associated with a particular colour like, for example, “blue”.

However, while the colours are present and indeed can be helpful for navigating the ribbon, to me they aren’t significant or firmly associated with particular numbers, i.e., when thinking “12”, for instance, I don’t necessarily think “orange”. Rather, those colour mappings are both fluid and largely irrelevant to my perception of numbers.

Now, you might ask: Are there any tangible benefits or downsides to perceiving units of time and numbers as spatially related? Obviously, I couldn’t really tell the difference from personal experience, because for me, it’s always been like this. However, I suppose that being able to relate to numbers in terms of spatial constructs helps with accessing and processing numerical information, e.g., remembering events and numbers or doing calculations.

There are studies (What is the relationship between synaesthesia and visuo-spatial number forms?, Ovals of time: time-space associations in synaesthesia) that suggest people who visualise time in that manner are better at memorising events and dates.

This, in turn, is somewhat reminiscent of the – in this case deliberate, rather than innate – use of the method of loci (popularised as the titular character’s “the memory palace” in the 2010 BBC “Sherlock Holmes” series) for recalling information by visualising pieces of information as being associated with specific locations in a familiar spatial environment.

For most practical intents and purposes, it probably doesn’t make that much of a difference. I’m neither a brilliant mental calculator, nor a “Sherlock Holmes”-level master of deduction.

From a more creative point of view, though, insights from this type of perception might indeed prove useful in other ways, too: Designer Joe Winter wrote an insightful article on how time-space synaesthesia could help inform design decisions based on the mental models originating from it.