OK, you’re right. Countless articles and great books by brilliant designers have been written on this subject. So, who am I to tell you why design matters?

As matter of fact I’m not going to tell you anything new. It just happened that I came across a particularly hideous example of bad industrial design that underlines pretty well that

So, without further ado, the hideous example is this: 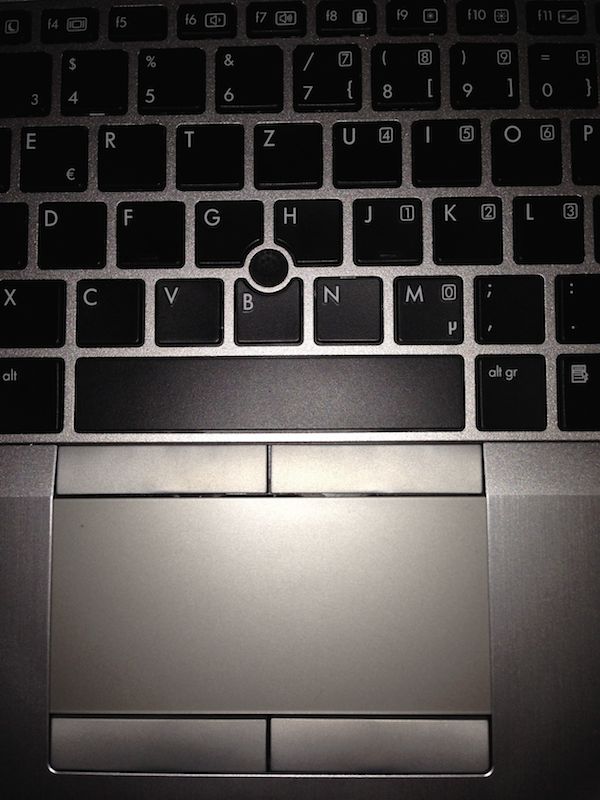 A laptop keyboard / touchpad design from hell by a well-known computer manufacturer / enterprise hardware and software provider. I can only presume their design process went something like this:

“Ok, listen everyone. Apple’s got these really shiny, well-designed laptop computers. We need to compete with them in that respect.”

“Cool. Let’s give our laptops a silver base colour so they kind of look like Macbooks from afar and on the first glimpse. Doesn’t matter on the second view they look like they’ve been painted with cheap silver model making paint. After all, the first impression is what counts, isn’t it?”

“Maybe we should also remove the touchpad buttons so our laptops will be easier to use just like Apple’s.”

“That would be difficult to design and manufacture. We’d need a touchpad that can not only serve as a pointing device but also be used for clicking.”

“Ah, I see. We’re not in the business of difficult. So, screw fewer buttons.”

“I’ve heard that some people don’t like buttons below the touchpad.”

“I’ve got a great idea: Let’s just put another set of buttons above the touchpad.”

“Oh, and let’s not forget the pointing stick. IBM used to have those on their ThinkPads so every enterprise laptop needs them.”

“Yeah, let’s add a pointing stick on top of that!”

The result of this imaginary design process (though I fear I’m quite close to how it actually happened) not only looks like crap but in fact is pretty much unusable as a laptop computer. Those multitudinous buttons and pointing devices make using the computer without an additional mouse almost impossible:

You frequently and inadvertently touch one of the pointing devices while typing and the mouse pointer moves to a point on the screen you didn’t expect it to be. You continue typing and text appears where you didn’t want it to. A program is activated because you – again unintentionally – touched one of those numerous buttons. It’s a bloody mess!

This is an example of really terrible design that’s so frightfully inadequate to the point that the product can’t even be used for its actual purpose: You have to use it with a mouse, which pretty much defeats the purpose of a computer that can be used on the road or generally outside an office. All you’ve got is kind of a desktop PC replacement – and a poor one at that.