A few weeks ago I’ve been to beautiful, vibrant Dublin for this year’s Web Summit. Web Summit – self-proclaimed (and from what I’ve seen and experienced quite rightfully so) “world’s greatest tech fest” – is a 3-day event packed to the brim with a huge variety of talks and presentations on different tracks such as Design Summit, Enterprise Summit and Health Summit. Besides, there’s a vast number of startups both pitching on a fewer smaller stages and presenting their respective products at small booths throughout the venue. 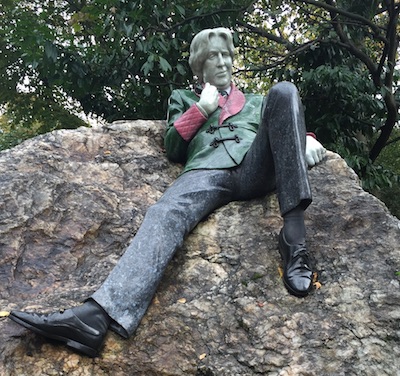 There were quite a few very interesting, high-profile speakers such as:

It’s a pity though that David Heinemeier-Hansson had to cancel his talk titled RECONSIDER. Considering his write-up it would have been a much-needed corrective to all the “unicorn, disruption, eating the world” bullshit talk that’s pretty dominant in today’s startup world.

The by far most interesting aspect of Web Summit however even weren’t those high-profile speakers. The most exciting part was meeting and talking to lots of interesting people in general and founders in particular, getting to know their startups and products. I’ve come across a variety of ideas – sometimes interesting, sometimes less so, sometimes funny or ridiculous – and passionate founders as well.

The prize for the most improbable startup to present at Web Summit goes to mainframe cloud, who’ve developed a modern tool for managing AS/400 mainframe applications. They even had a live demo involving an actual green screen application! I suppose most of the Web Summit visitors didn’t know what the heck this was about (or weren’t even old enough to have seen a green screen before …). That’s what entrepreneurship is about: Recognizing a real customer problem for which there’s a huge market and providing a usable solution. It might not be as cool as next big ‘Uber-for-X’ kind of thing but it provides actual value and solves a painful problem.

Connecting with people is what made Web Summit so rewarding. This is where the evening events – aptly called Night Summit – came in. Basically, these were pub crawls through some of Dublin’s finest pubs and music venues. I met quite a few nice and interesting people over a pint of Guinness or Smithwick’s (which I highly recommend, a great Irish ale …).

Dublin is an amazing city. The nightlife is vibrant with music and bands being a dominant aspect of the local culture. The cityscape is beautiful, the food awesome (I highly recommend The Winding Stair) and there’s lots to see and do.

Unfortunately, this year Web Summit took place in Dublin for the last time (for now, that is). From what I’ve heard there’s been justified criticism from the event organizers directed at the Irish government and local authorities for not providing the infrastructure required for a world-class large-scale event like this but also some drama and an eventual falling-out between the parties involved. Hence, next year’s Web Summit will take place in Lisbon.

I’m pretty sure Lisbon is a fantastic city as well but I can’t help but feel at least a little sad about this. Dublin and the Web Summit just seemed like the right fit, which is only natural because the event has grown organically there over the last 5 years.